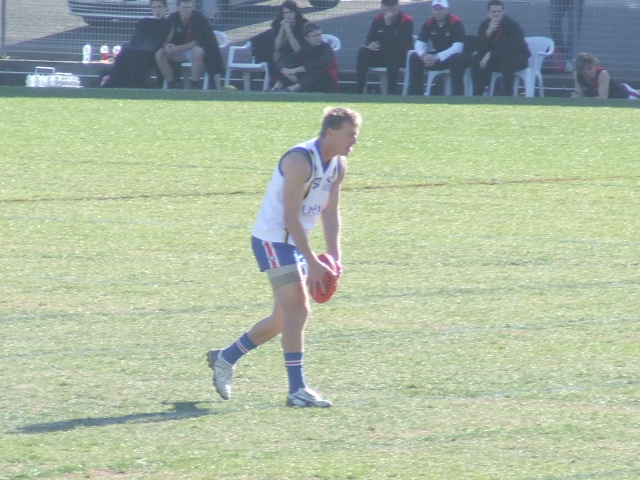 A split round in round 14 gave all teams a week off in the lead-up to the finals, but the round that took place was one that created more questions than it answered, with battles for the minor premiership, the double-chance and 5th spot heating up even more. Three of the matches played were thrillers, while another match was the upset of the season.

The upset was at Henson Park, where top side UNSW-ES took on North Shore. The top team up against a 7th place team who had lost to the bottom team the week before, who have struggled against the Bulldogs in recent years; and when the two sides had met at Gore Hill earlier in the season the Bulldogs had run a score of over 200 past the hapless Bombers. It had to be a mismatch.

In the end, it was a mismatch; but not in the way anyone could have anticipated. Despite Troy Luff scoring a couple of early goals to keep the scores tight early, the Bulldogs were off their game. The drive through the midfield was subdued and the Bulldogs struggled to create any pressure. But the Bombers had come with a determination that had been missing at stages this season. A strong burst in time-on in the first quarter saw the Bombers take a 17-point lead into the first change; and 3 unanswered goals in the second term shut the Bulldogs out of the contest.

The tale continued without a twist in the second half, North Shore cruising home to a 78-point win. For the Bombers, the result gets them back into the finals race and will lift the morale and confidence among the team after some disappointing results earlier this season. For the Bulldogs, the game was a shock to the system, but with so many of their top players out of sorts in this game, they will work hard to ensure their guns are firing in their upcoming matches. The Bombers shared the goals around, with Sam Curruthers kicking 3 goals in the last quarter to lead all scorers; while Kulk, Pryor, Attwood, Wason and Butchasky each contributed 2. 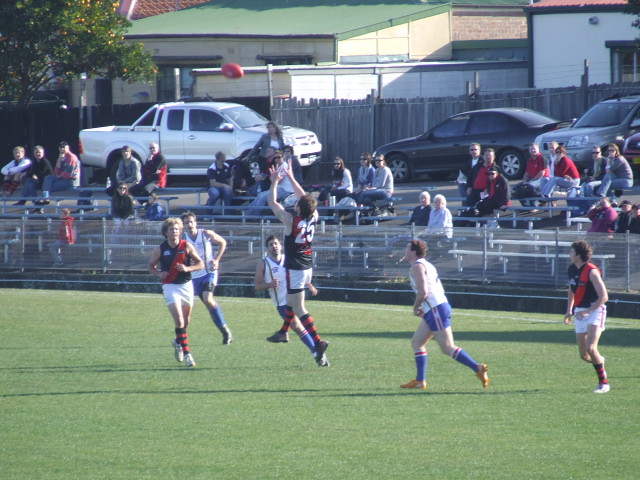 Meanwhile at Charles McLaughlin Oval, St George leap-frogged East Coast Eagles into the top 3 with a thrilling 4-point victory. It was an epic encounter in which the lead changed hands numerous times; and although the Eagles led at every change it was never by more than a kick. But it was St George, after a 4 goals to 3 final quarter, who prevailed to end the Eagles' 7-game winning streak. Maurice Goolagong was again outstanding up forward for the Crows with 5 goals, while Peter Dugmore scored 3; and Declan Donohue and Mitch Cers were among the Crows' best. For the Eagles, Ben Rogers was again an effective target up forward with 5 goals, while Ryan Smyth scored 3 and Michael Sankey was their best.

It was also close at Sydney Uni No 1, where the Students maintained their 5th position with a 2-point win over Wests. It wasn't looking that way early, with the Students' inaccuracy giving Wests an early lead. By half-time, the Students had managed just 1.10 and was trailing by 19 points; but they hit their straps after the break to work their way back into the contest. Despite the Magpies scoring more goals for the day, the greater number of opportunities the Students created was enough to get themselves a narrow win. Michael Healy, Alex Lee and Joshua Leary each scored 2 for Sydney Uni, while Mark Mendola and Mark Withers each contributed 3 goals to the Magpie cause. 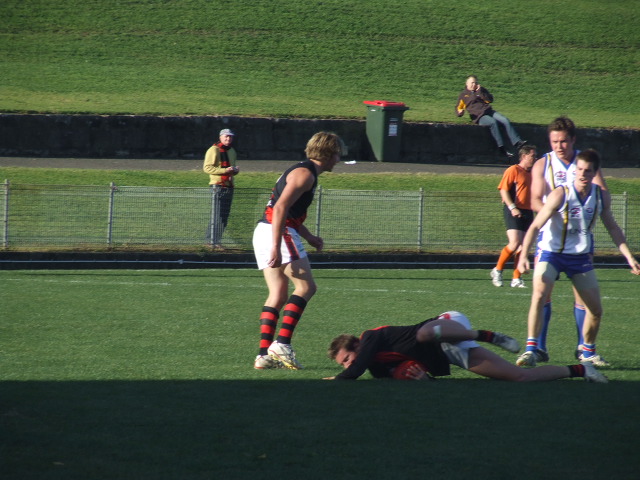 But there was no upset or thriller at Monarch; instead it was a ruthless Pennant Hills that dominated from start to finish. Already looking one-sided with the Demons leading by 51 points at half-time, an 11 goals to 1 third term turned the match into a demolition; and with the Bulldogs and Eagles both going down, this result sent Pennant Hills to the top of the ladder and ended Campbelltown's mathematical finals hopes. On a day when there were plenty of Demons goals to spread around, Laine Spencer led the way with 7 while Scott Myers and Nick Campbell each contributed 5. The Blues were unable to find a multiple goalkicker, and were held to just 2 goals.

The only match in the second week of the split round saw another cliff-hanger, with Balmain recording their first ever win at North Dalton. In a high-scoring shootout, Wollongong looked to have done enough to win when a strong third quarter burst took them to a 37-point lead at the last change. But Balmain refused to surrender, and with the wind at their backs getting stronger they raced home with 8 goals to 2. At the final siren the scoreboard showed the scores level; but the goal umpires' notebooks over-ruled the scoreboard, giving the Dockers a 1-point win. For Balmain, it was their second win in a row and third for the season; and the club, which has struggled for many years, looks to have generated a new lease of life. It was a disappointing loss for Wollongong, one which has almost certainly got them the wooden spoon for 2008. Troy Parker scored 6 for the Dockers and Ryan Officer 4; while for the Lions Cameron Stanton led the way up forward with 4 goals. 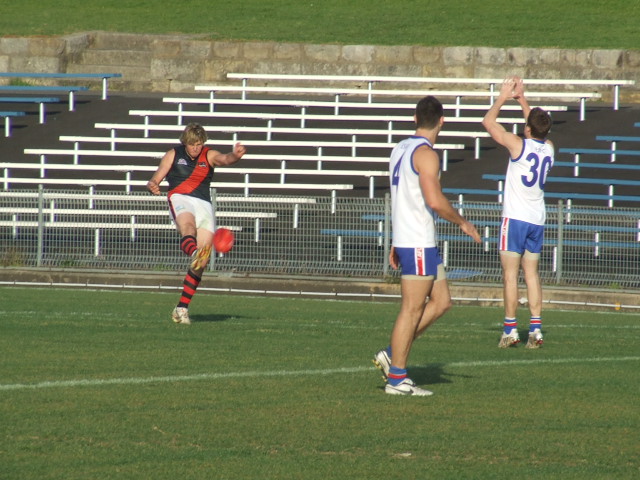 In First Division, UTS booked themselves the double-chance for the finals when they accounted for Holroyd-Parramatta by 92 points. Manly's 18-point win over Macquarie Uni kept them 2 games clear in second place ahead of Southern Sharks, who had a 80-point win over NorWest Jets. Camden leap-frogged Penrith on the ladder with a 59-point win over the Rams at Fairfax Oval. 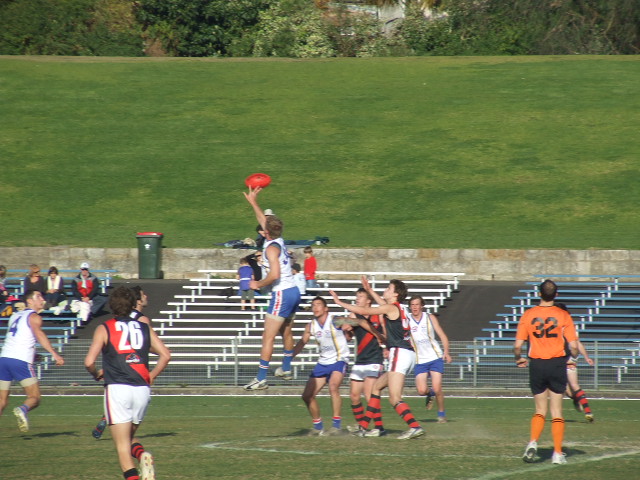 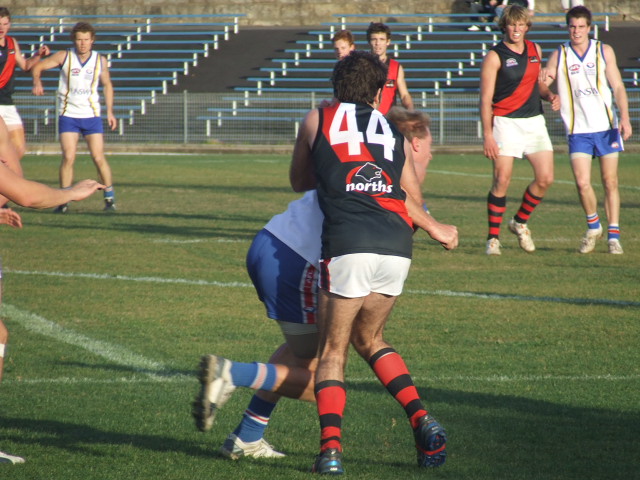 IT'S THE FINALS COUNTDOWN

Only 4 weeks to go till the playoffs, and all the positions in the top 5 are up for grabs. At the top of the ladder are a group of 4 teams. The top 3 are level on games, and just 1 game behind them with a superior percentage to UNSW-ES and St George is East Coast. Those 4 teams will all make the finals, but one will be seeded straight through to the second week of the finals while one will face sudden death in the playoffs. The 5th spot is currently held by one game and percentage by Sydney Uni; but Wests and North Shore are ready to pounce should the Students slip up.

The remaining matches for the teams still in contention are (black = finallist, blue = contender, red = non-finallist) :

NEXT WEEK'S FIXTURES (Lurker's Kiss of Death in bold)

East Coast Eagles has the bye.