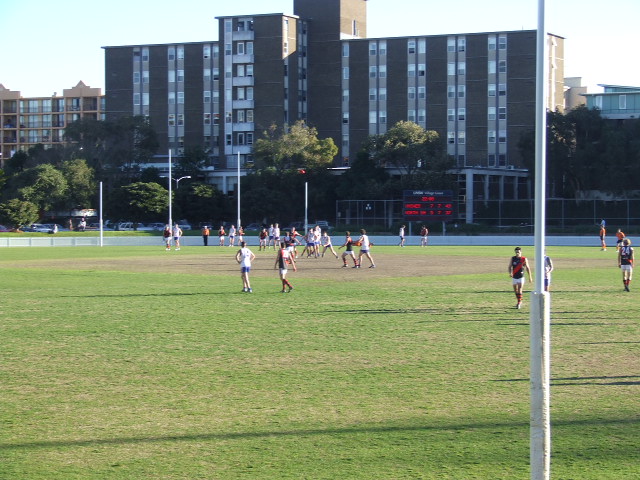 A football season can be a long time, and the ebbs and flows of teams' fortunes can fluctuate wildly. And occasionally a round comes along when the form guide and all expectations can be blown out the window; when the underdogs prevail and those who fancy themselves as predictors of fortune find themselves shaking their head in disbelief. Round 12 was such a round, with the top two sides being unable to record victories; and even the game with the biggest final margin was in the balance midway through the final quarter.

That game was at the Village Green, where UNSW-ES took on North Shore. The Bulldogs, after an impressive win against Pennant Hills last week, were in third place and looking for a win to consolidate their hold on a double-chance position. North Shore meanwhile haven't had things go the way they would have wanted this season, and needed a win to remain within striking distance of the top 5.

It was goal for goal in the first quarter, and North Shore made an early statement in the second quarter when Ron Wason shrugged two opponents before going for a run with two bounces before kicking truly on the run. But the Bulldogs then began to assert themselves, and through weight of possession began to apply scoreboard pressure on the Bombers. A set shot from Troy Luff gave the Bulldogs the lead, and on 9 minutes Mike Beardsley found space to mark unopposed and run in from 40 metres. Peter Kefalas found a running Ben Woods for another. Adam Sutton got one back for the Bombers against the run of play, but when Jon Bradfield rode a bump beautifully as the clock ticked into time-on before playing on and kicking truly the Bulldogs took a 2-goal lead into the rooms at half-time. 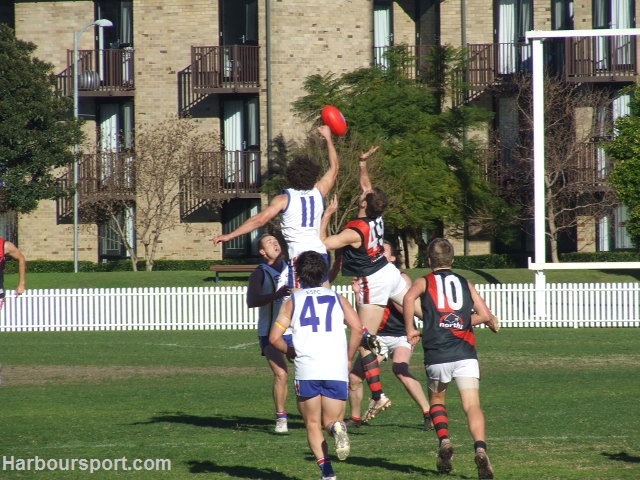 Bomber coach Michael Hosking was fired up, delivering a spray to his charges that was clearly audible from the grandstand. But his diatribe had the desired effect in the third quarter as the Bombers worked their way back into the contest. It took just 5 minutes for the scores to be levelled; first with a miraculous soccer effort from Adam Sutton that Ronaldinho would have been proud of, then from a free to Kerryn Hughes. Troy Luff and Lachlan Pryor traded free kick goals, and at the 10 minute mark of the third term scores were level. The ball travelled from end to end, the tension building as the scoreless minutes ticked by. Ryan Underwood broke the deadlock with a poster to give the Bulldogs the narrowest of leads, but the Bombers were to hit the front just a minute later when Pryor set up James Webster. Leigh Lavery then got involved in the contest with a quick-fire double to give the Bulldogs an 8-point advantage with just seconds to go. But that was enough for the Bombers to threaten, a long bomb by Brendan Fitzgerald from the centre break going through, then the Bombers going forward again with Pryor gaining possession before the Bulldogs were saved by the bell.

The final quarter was a quarter of two halves; and it was hard to believe they were part of the same game, let alone the same quarter. There were no less than six changes of the lead in the first 12 minutes. It was goal for goal, each side scoring three, each goal seeing the lead change hands. It was thrilling end-to-end stuff, each side pulling out their heroic party tricks in what was shaping as a dramatic cliff-hanger. Who would be holding the last layer of the parcel when the music stopped?

But once the Bulldogs hit the lead again at the 12 minute mark, the exhausted Bombers had nothing more to give. The remaining minutes of the game were one-way traffic, as the Bulldogs ran through another 7 goals without reply to turn what was looking like a close game into a blowout. For the Bulldogs, it was a valuable percentage boost, but a disappointing fadeout for the Bombers who had battled so valiantly for so long; and it would be hard for the Bombers to accept that they were beaten by 47 points, having led three times during the last quarter, and that their finals hopes took such a major hit. The Bombers came from two games outside the finals at this stage of the season last year to make the playoffs; and if they are to play at the key end of the season this year will need to do the same again.

Veteran Troy Luff kicked 5 for the Bulldogs and Leigh Lavery contributed 4, while Jason Coulloupas and Michael Beardsley were again among their best. For North Shore, Lachlan Pryor battled hard all day, scoring 4 goals while being easily North Shore's best.

Click here to see Harboursport's photo gallery from this match. 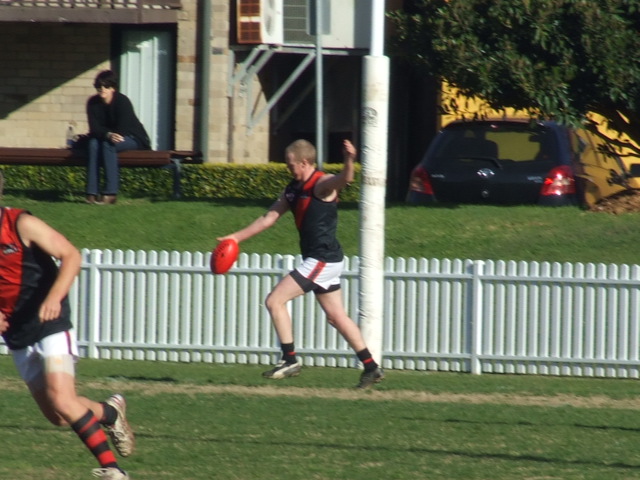 Top team East Coast Eagles had taken all before them to be undefeated going into the round, but their unbeaten run came to an end when they suffered their first ever defeat at Bruce Purser Oval in a 5-point thriller at the hands of Campbelltown. It was goal for goal in the first half, with the Blues leading by a point at the long break. The Blues then took the initiative in the third term, their 4 goals to 2 return extending the lead to 16 points at three-quarter time. And they were to need all the buffer they built up as the Eagles fought back hard in the last quarter, hitting the front before the Blues steadied to recapture the lead in the final minutes of the game.

The Blues have been a surprise packet this season, where few had expected them to be finals contenders; but find themselves just one win short of the double-chance in the finals, and to claim the scalp of the highly-fancied Eagles was a remarkable feat. Dale Chivas kicked 5 for the Blues, while Ray Love and Fraser Brown were among their best. For the Eagles, Jon Vlatko again had an impressive performance and did his Phelan Medal chances no harm despite his side's defeat.

Second placed Wests were also unable to record a victory, although they didn't lose either. The closest possible result was fought out at North Dalton Oval, with Wollongong and Wests sharing the spoils; the Lions' first draw since their promotion to Premier Division in 2005. And it was also their most accurate performance ever, with the Lions not scoring a single behind all day; meaning that although the Magpies had 10 more scoring shots they were unable to record the victory.

The Lions kicked 4 unanswered goals in the first quarter, and still led by 12 points at the long break. But Wests came out firing after half-time, taking the lead early in the third term to lead by 16 points at the last change. But the Lions found something extra in the last term, their 4 goals to 1 return getting the match back to level terms. In a low-scoring game, Duane Jefferis and Tom Heath's 3 goals apiece for the Lions were worth their weight in gold, while Clint Wells and James Weavers played solid games. For the Magpies, Brenton Mumme and Shane D'Arcy were among their best.

The day at North Dalton was even more remarkable as the First Division match that preceded the Premier Division game was also a draw - surely a unique occasion in which two grades on the same ground on the same day have been drawn.

Pennant Hills returned to the winners' list at Ern Holmes Oval on Saturday, the reigning premiers breaking a 3-match losing streak. But the Demons were pushed all the way by a determined Sydney Uni side; and the Demons' final winning margin was just 12 points. The Students got off to a bright start to lead by 11 points at quarter time, but were unable to score a goal in the second term which enabled the Demons to get out to a 17-point lead at the long break. Sydney Uni again came out hard in the third term to cut the margin to 9 points at the last change, but that was as close as they could get as the Demons scored 3 goals to 2 to ensure victory. In a low-scoring game, Jon Moraitis and Sam Widmer were among the Demons' best, while the Students were well served by Gary Burch and Brydon Coles.

No sign of an upset at Olds Park, where St George joined Sydney Uni and North Shore on 4 wins with a 46-point victory over Balmain. 4 goals to 1 in the opening term got the Dragons off to a good start, and by half time the St George lead was out to 32 points. But the Dockers weren't finished yet, and with 5 goals to 2 in the opening term the margin was back to 15 points by three-quarter time. But the break killed Balman's momentum and the Dragons re-asserted themselves in the last quarter. Declan Donohue kicked 5 for the Dragons in a best-on-ground performance, while Bryce Addison kicked 4, Nathan Smith and Rod Craig being prominent around the ground. For the Dockers, Daniel Napper and James Miller were among their best. 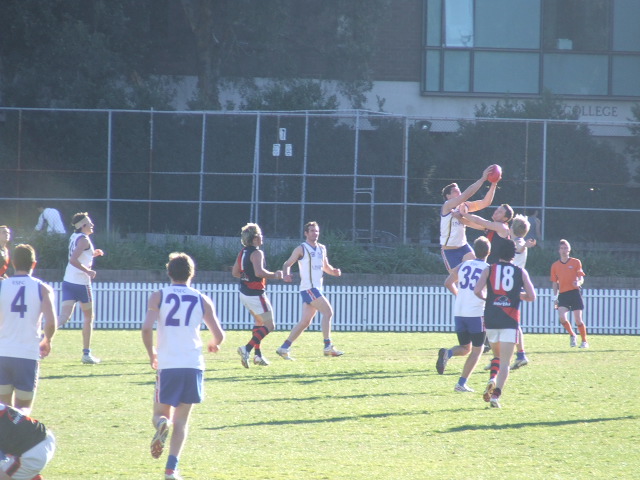 An interesting (and possibly unintended) consequence of the divisional system introduced this year is that, at this stage of the season, only two clubs (Balmain and Camden) plus Riverview, don't have at least one team in the top 4/5 of their division. Even if a club's first grade don't look like making it, there's still plenty of reason for a club to keep their morale up for the sake of one of their other teams. And we could potentially be seeing a lot more variety of teams in action when finals time comes around.

In Premier Division, the remaining matches for the teams still in contention are:

NEXT WEEK'S FIXTURES (Lurker's Kiss of Death in bold):

Macquarie University has the bye.

Macquarie University has the bye.