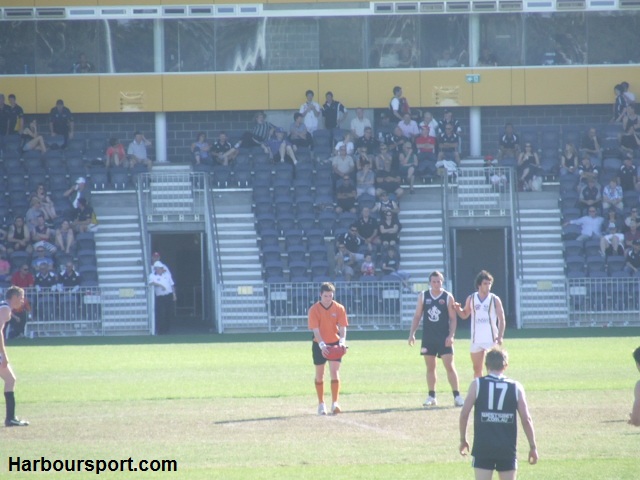 Article and Photos by Michael Shillito

Since 2002, no team that has lost the Second Semi Final in Premier Division has bounced back to win the Preliminary Final. And that record was to be maintained on Sunday as UNSW-ES reversed the result of their Qualifying Final trouncing to defeat Western Suburbs at Blacktown on Sunday. The run of fine weather for this year's finals series continued, and the temperature soared to 32 degrees; testing conditions for the players.

The ball travelled from end to end in the early stages, and it was 7 minutes before the first score was recorded. It came with a nice crumbing effort by Sam Rutland, which opened the floodgates to enable the Bulldogs to make a cracking start and set up what would be a match-winning lead. Mac Collett played on with a long bomb from the 50m line to give the Bulldogs their second. On 16 minutes, Brad Abbott marked on the edge of the 50m line but spotted a closer option and found Joel Robbie in goal-scoring range. Two minutes later, Peter Kefalas on a tight angle centred to Ryan Underwood and the Bulldogs had their 4th.

The Magpies badly needed a goal, and a golden chance went begging when Adam Fiddler received a 50m penalty which put him 25 metres from goal but hit the post. Finally late in the quarter Matt Eurell converted a set shot, but the Bulldogs held a 14 point lead at quarter time. In the hot conditions, both sides moved their quarter-time huddles closer to the fence than they normally would in order to be in the shade of the grandstand.

But within seconds of the start of the second quarter, a red-hot contest saw Brett Bedwell shown a yellow card. Earl Shaw took the free kick, and found Brad Abbott to extend the Bulldogs' lead. By now the Bulldogs were playing with confidence, and the feeling grew deeper on 9 minutes when the big-hearted Leigh Lavery set up Peter Kefalas for another UNSW-ES goal.

Wests were having their share of possession and creating scoring opportunities, but were unable to capitalise on their chances. Although there was little between the teams in terms of the number of scoring shots, the game was threatening to fall out of the Magpies' reach. The Magpies got one goal back, when Matt Eurell marked on a tight angle but received a 50m penalty that enabled him to move into the goalsquare and from there it was an easy shot at goal. But when Ryan Underwood converted a set shot as the clock ticked into time-on, the Bulldogs had won the quarter.

The third term was a low-scoring affair, with just four scoring shots in total for the quarter. The Magpies worked hard to contain the damage that the Bulldogs had inflicted on them, and a play-on goal to Andy Eurell gave them a good start to the third term. But it was to be their only score, as the Bulldogs tightened up the game. Underwood's third goal cancelled out Eurell's effort, and when Brad Abbott from the 50m line found an unmarked Adam Gulden, the lead was over 5 goals. By the time the three quarter time siren sounded, the Magpies had managed only three goals, and with the deficit over five goals it appeared they were drifting to elimination and that it would be plain sailing for the Bulldogs to wrap up a grand final berth.

But suddenly, within the first five minutes of the last quarter, the contest sprung to life. Wests players who had struggled to get a kick for three quarters suddenly found themselves contesting for possession. 30 seconds into the last quarter, Medair Kassem was on the board. A turnover from a kick-in set up a goal for Eid Kassem. On 5 minutes, Matt Eurell was paid a free 30 metres out directly in front; and suddenly the margin was back to 13 points, the Wests supporters in the grandstand were in voice and a game that had looked all over just a few minutes earlier was back in the balance.

By now the shadows were getting longer, giving relief to the players after such a hot afternoon. But as quickly as the flicker of Magpie hope lit, the Bulldogs moved to extinguish it. Pivotal to this passage of play was Brad Abbott, firstly setting up a running Marc O'Regan for a much-needed steadier then twice marking and goaling to restore the three quarter time margin and putting the contest beyond doubt. With the margin back over 5 goals, the Bulldogs were safe and could finally look ahead to next week's grand final. The Magpies continued to fight to the end, and scored the last three goals - but their strong final quarter was too little too late and the Bulldogs had enough of a buffer to complete a 14-point win. 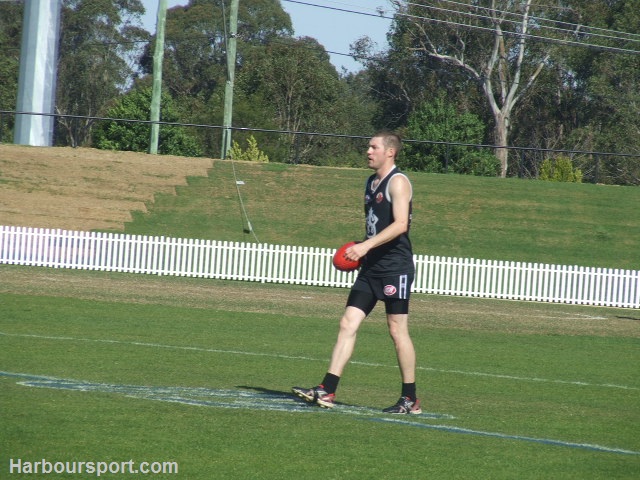 Ryan Underwood and Brad Abbott kicked 3 goals for the Bulldogs, while Marc Beardsley, Marc O'Regan and Alex Henderson were among their best. For the Magpies, Matt Eurell kicked 3, while they were well served by John Simpson, Shane D'Arcy and Lynn Roehrig. But it was UNSW-ES's day, the horrors of their Qualifying Final being put reversed and the curse of the Second Semi Final loser continuing for the 7th straight season. Wests' season is over, while UNSW-ES will take on the challenge of football's big day.

And a tough challenge it will be, with just 6 days to recover from what was a draining run in the heat before taking on a rested East Coast Eagles. But the Eagles have challenges of their own to overcome in what is sure to be a fascinating Grand Final at Blacktown on Saturday. 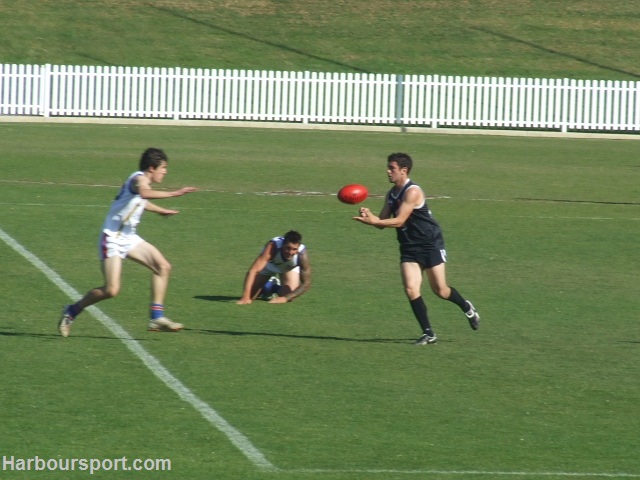 Saturday at Blacktown Olympic Park saw four Grand Finals played in fine and warm conditions. With the prospect of promotion to higher divisions up for grabs, as well as the quest for premiership glory, all grand finals were hard-fought encounters.

The Divisional structure has worked well for the university clubs, and all four grand finals were won by uni clubs. If UNSW-ES and UTS win their Grand Finals on Saturday, then the Under 18s Premier Cup would be the only competition to not be won by a university.

The Second Division decider saw Macquarie Uni take out a 28-point win over UTS. The Warriors started brightly with a 4 goals to 2 opening quarter, and by winning every quarter they ensured there was no way for the Bats to get back in the contest. Scott Cations was awarded best-on-ground after his 6-goal haul. 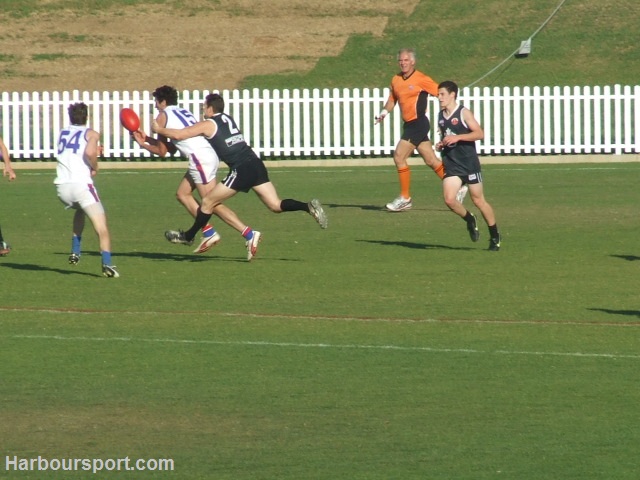 The Third Division grand final was a thriller. UNSW-ES had led all day, but a strong comeback by UTS saw the final margin reduced to just 10 points. But the Bulldogs were able to hang on to claim the premiership. Chris Peters won the best-on-ground award, while Ben Camilleri kicked 3..

In Fourth Division, Sydney Uni were too good for UNSW-ES and took the title by 46 points after an explosive 8 goals to 1 second quarter. Dominic Tilden's 5-goal haul saw him awarded the best-on-ground honours, while Chris Perkins also kicked 5 for the Students.

The Under 18s Challenge Cup decider ended controversially, with two Southern Power players red-carded within a minute and the game called off after just 9 minutes of the last quarter. But there was no doubt about the winner of the match; with Sydney Uni being far too strong to win by 93 points. Todd Considine was awarded the best-on-ground title, while Tom Aitken kicked 4. 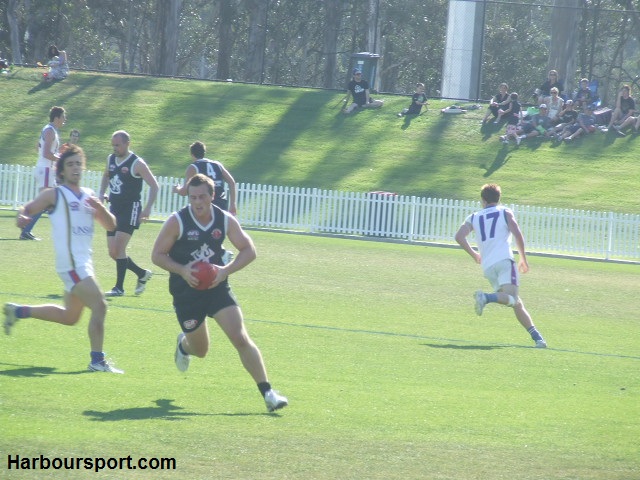 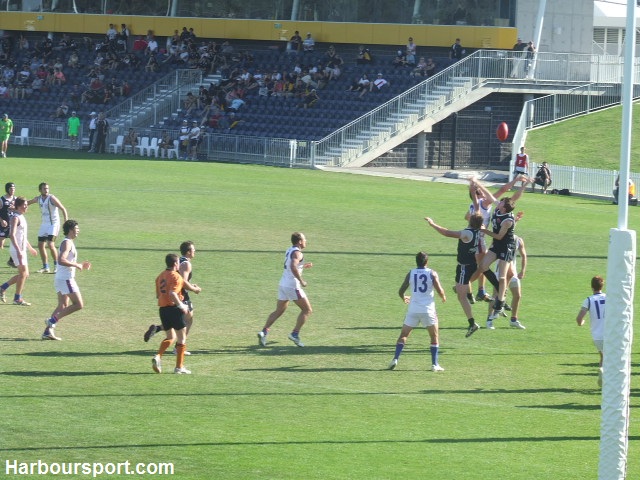