Article and Photos by Michael Shillito
In football, there’s no substitute for scoreboard pressure. Getting off to a good start, getting early goals on the board, forcing the opposition to play catch-up. When coming from behind, you find yourself having to take more risks, risks that don’t often come off. It’s why, when there’s a strong wind favouring one end, the team that wins the toss will always kick with the wind in the opening term. And although there was no wind to speak of at Picken Oval on Saturday when Wests played host to Sydney Uni, the advantages of the early lead were all too apparent.
It’s been a tough season so far for Wests. Coach Peter Free, in his first season with the Magpies, faced an off-season player exodus which took many of their biggest and most experienced names away from the club. Withers to Canberra, the remaining Kassems to Auburn, the Linsens to Campbelltown, Chris Lees on the sidelines, the limited availability of gun forward Matt Eurell. They had a big win over North Shore in a TV game early in the season; but for much of this season so far the Magpies have struggled, and find themselves in the lower reaches of the ladder.
But it’s been a different story for Sydney Uni so far this season. Strong player numbers, a string of quality recruits that more than compensates for their lost players. The Students are one of three teams tied for the ladder leadership, coming into this match on the back of a three-figure winning margin over St George in last week’s TV game; and have high hopes of reversing last year’s shock Grand Final defeat.

The match at Picken Oval had the potential to be a blowout, and in the early stages it was. The Students raced out of the blocks, putting on a burst of six goals to one in a lopsided opening term. The Students were first to the ball, running forward at will and encountering little resistance from the Magpies. The Magpies rarely went anywhere near their forward 50, the ball being seemingly permanently stationed at the social club end that the Students were attacking in the opening term, a quarter that finished with the Students holding a 33-point lead.
But if the Students thought they were going to cruise to a big win, they were in for a shock. Whatever Peter Free said to his charges in the quarter time huddle had the desired impact, as the Magpies began to fight and scrap for every possession. The Students found themselves placed under pressure, forced to hurry their kicks forward and their forwards found themselves well held. The Students could manage only behinds from their forward movements.

Later in the quarter, the tide turned and the Magpies began to get the run of play. But without Matt Eurell, who scored all their goals against East Coast last week, the Magpies struggled to turn their period of dominance into goals. The Magpies scored seven behinds for the quarter, most of them long-range bombs from near the 50 metre line, as their forward line were unable to produce leads to give shorter options. Had they been able to get some goals out of that period in the second quarter, they may have been able to get themselves back into the contest. But for all their efforts, the Magpies still found themselves 30 points in arrears at the long break.
The Magpies had plenty of possession-getters, especially during that period of revival. Dwain Watkins was clearly the pick of them, while Clint McGrath and Bill Lafferty were also instrumental. But for all their hard work, they were unable to get the goals that would have put them back into contention; and they couldn’t hold out the Students forever.
It took nearly 15 minutes in the third term before the Students finally ended their goal drought. But while the Magpies, with their desperation and hard manning-up, could hold the Students out at ground level, the Students had an ace up their sleeve at aerial level. Adam Campbell drifted down to the forward line, twice marking over the heads of the Magpie defenders and goaling to break the deadlock. Although the Magpies would score one goal late in the quarter, they had been unable to secure sufficient reward for their efforts, as the Students had extended their lead to 47 points. 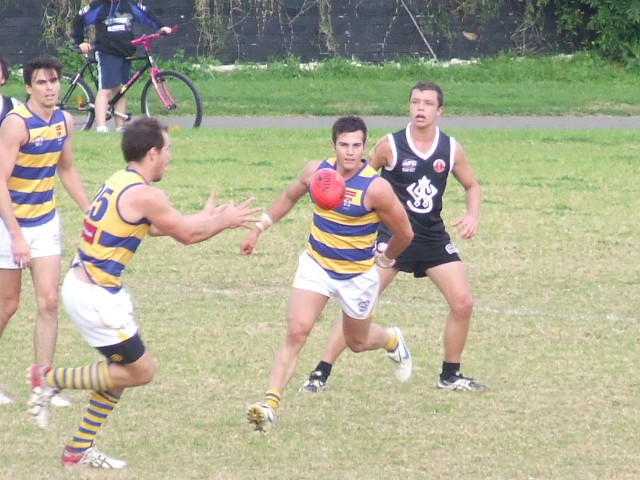 The game was safely won for Sydney Uni. For all Wests’ efforts, their defensive work and desperation in the midfield, they had only scored two goals. Finally in the last term they achieved some cohesion up forward, and won the final quarter, but by then it was too little too late.
The Students took out the game by 45 points. Other than the first quarter there were no spectacular efforts, no heroics, just a workmanlike performance that got the job done; even though it was far short of their televised dominance of the last match. Sam Sloane, Clint Wells and Michael Higgins were among the Students’ best; while the Magpies were best served by Dwain Watkins, Bill Lafferty and Matthew Lemme. But it wasn’t a day for dominant individual displays, more of a hard grind where both teams forced each other to work hard for each possession.

The value of a good start was also underlined at Blacktown Olympic Park, where the opening quarter was enough to determine the outcome of the game. A spot in the top five was on offer when St George took on UNSW-ES; and it was the Bulldogs who would finish the round in a finals position. With five goals to two in the opening quarter, the Bulldogs led by 19 points at the first change, and the lead had been extended to 27 at half time.
The Dragons fought back in the third term with two early goals, and were fighting hard, but the Bulldogs had the answers to any challenge that St George could throw at them; and critical late goals restored the half-time margin. The Dragons won the final quarter, but by then the damage was done.
Max Collett kicked four goals for the Bulldogs in a best-on-ground performance, while Xavier Brennan and Adam Gulden were also prominent. For the Dragons, Jon Shineberg was a shining light up forward with a return of five goals, while Pat McBride, David Lycakis and Lloyd Perris were among their best. The Bulldogs, after missing out on finals action last season, have done some good work to turn their fortunes around in 2011; and although they have a tough draw in the second half of the year, a return to playoff action remains possible. 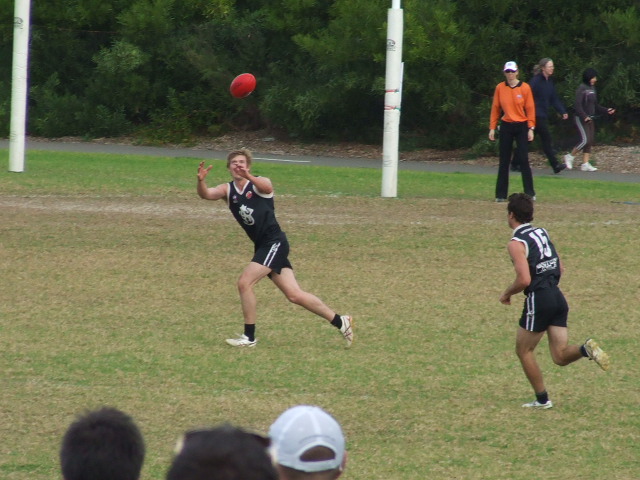 Balmain retained their share of the ladder leadership, and ensured Campbelltown would still be looking for their first win of 2011, when the Dockers were untroubled in recording a 62-point win over the Blues at Monarch Oval. The Dockers scored three goals while holding the Blues to a solitary scoring shot in the opening term, and after a relatively even second quarter the Dockers held a 24-point lead at the long break.
The third quarter was a shootout, as the Blues threw caution to the wind and went all-out into attacking mode; looking for a run of goals that would get them back into the contest. But the attacking flair they generated left them vulnerable to Docker forward pressure. Both sides were finding plenty of room to move during a third term that was played at breakneck speed, each side scoring 8.1 to leave the three quarter time margin the same as it was when the quarter started.
That quarter had been entertaining, but the Campbelltown run could go no further. The Dockers had the superior firepower that enabled them to go the distance, while the tiring Blues had nothing more to give. With seven goals to one in the final term, the margin blew out to 62 points.
Matt Edwins, relishing his return to his former home at Monarch, scored five goals for the Dockers; while Travis Stevens, Daniel Turner and James Howard were among Balmain’s best. For the Blues, Mark Leach, Mitchell Hogan and Matthew Scully worked hard all afternoon.

Illawarra have never beaten Pennant Hills, and the Demons maintained their perfect historical run against the Lions, bringing the Lions’ 3-game winning streak to an end with a convincing 65-point margin at Mike Kenny Oval on Saturday afternoon. The first quarter was evenly contested, with the Demons leading by 5 points at the first change; but the second quarter saw the Demons break away from the Lions, setting the tone for the remainder of the afternoon.
Four goals to one in the second quarter, and an unanswered run of four goals in the third term, saw the Demons extend the lead to an imposing 46 points at the last change. Victory was assured, and the Demons continued on their merry way in the final quarter with a 5-goal burst.

Daniel De Looze was a focal point for the Demons’ attack, contributing five goals to the Pennant Hills cause; while around the ground Tim Wales, Seb Parker and Nick Campbell were among their best. Ryan Price worked hard for the Lions to score four of their six goals, while Josh Lewis and Jeremy Daniher also did some good work for the Lions. The size of the victory was enough for the Demons to leap-frog UNSW-ES into fourth place on the ladder. But for the Lions, the winning streak is over; and with the Lions having already played one more game than the teams around the finals and a game behind with an inferior percentage, the Lions will need to establish another winning run to establish themselves as credible finals contenders.

Since defending champions East Coast lost their opening round game to Sydney Uni by a kick, the Eagles have been in imposing form; and have won all their matches since then by over 10 goals. And the run continued in impressive style when the Eagles dominated proceedings against UTS in a twilight fixture at Bruce Purser Reserve to take the game by 132 points.
A reflection of the Eagle dominance was their return of 41 scoring shots to 4 for the match. The Eagle defence, tight as ever, refused to allow the Bats any latitude up forward, the Bats unable to score at the southern end all evening. The midfield, efficient and effective, again showed itself to be the benchmark for the remainder of the competition; and the Bats were unable to contain them. And up forward, the Eagles found Stephen Doyle to be an effective target, the Eagle finishing with 8 goals in a best on ground performance. Michael Johnston and Jack Dimery were ball magnets all evening, but it was hard to find a single Eagle who lowered his colours through the game. Tom Steinfort, Andrew Morley and Tom McGregor tried hard, but the Bats were outgunned all evening and were never in the contest.
The Eagles, are equal on points with Sydney Uni and Balmain; but it is the Eagles percentage, and their ability to play a full four-quarter performance every week, that sees them maintain top spot on the ladder with an enormous percentage. But it was a different story for UTS, and after dominating First Division since the divisional structure was introduced, it’s been an enormous step up to Premier Division; a step that the Bats are still working to adapt to, and their first win in the top division remains elusive. 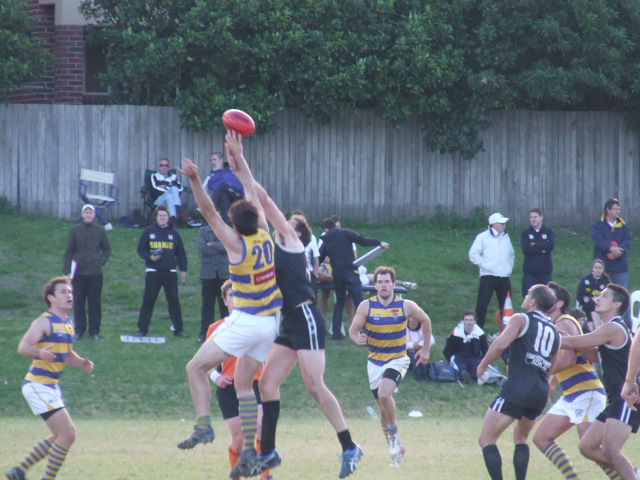 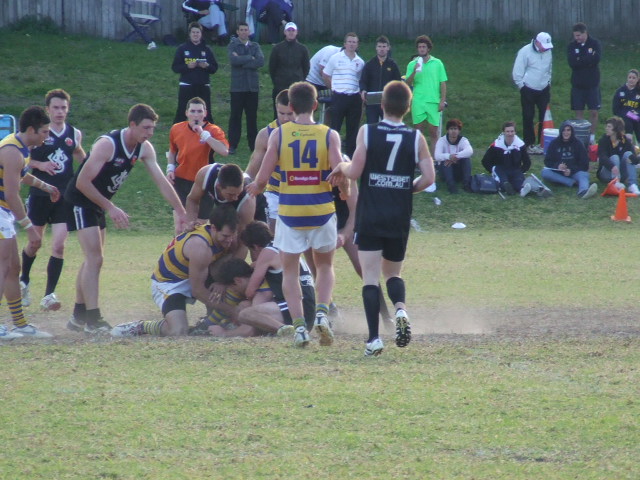